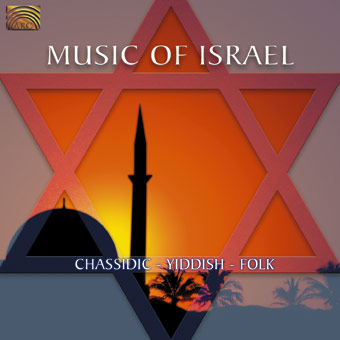 6. EITAN MASURI: Rachem Al Tzion (Have Mercy on Zion) - Translation from the Prophets - 2:43

15. BORIS SAVCHUK: Mizmor Le'David (A Psalm for David) - Psalms 23 - 3:43
Popis
Israeli Folk Music While today's societies have had centuries or even millennia to develop a national music, the State of Israel has had only since 1948 to "grow" a cultural identity. Jewish immigrants to Palestine brought the music of their countries of origin with them. New compositions sought to unite these immigrants with a common cultural identity with short, simple folk songs about the experience of living in the Holy Land, from songs about agriculture to lullabies and love songs. Jewish musicians in the early state of Israel developed a distinctive musical style, drawing on European tonality, but colouring it with Mizrachi (eastern) or "exotic" sounds. Israeli folk music, along with its companion folk dance, spread quickly throughout the country and then the world, aided by radio and then television. Today, much of Israeli popular music retains a folk-like element, both in the topics of the songs and in musical style. The folk music created in Israel in the past century is significant not only for that tiny country, but also for Jews across the world who look to Israel for cultural and religious inspiration. Israeli folk music old and new, true to its original creative impetus, allows for the unification and common identification of Jews throughout the world. The Gevatron One of the artists who perform on this CD is The Gevatron. They are regarded as THE representatives of Israeli folk music. The group was established in 1948 at the Geva Kibbutz in the Jezreel valley, and ever since then they have been composed of members of the Kibbutz and its surrounding area, who continue to record and perform after their working hours at the Kibbutz. The Gevatron have recorded many albums, which have been extremely successful abroad. Their beautiful songs are played throughout the country on celebration days and in times of happiness and sadness, in war and in peace.
Prihlásenie
NOVÝ ZÁKAZNÍK
Newsletter