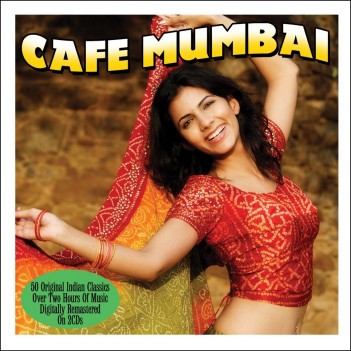 1. Honton Pe Hansi Aankhon - Mohammed Rafi & Asha Bhosle
2. Chale Jana Zara Thahro - Shankar Jaikishan, Sharda,Mukesh
3. Kala Doria - Lok Geet
4. Nee Baliye Rut Hai Bahar Ki -
Mukesh, Lata Mangeshkar & Shankar - Jaikishan
5. Edhar Kankan Udhar Kankan - Asa Singh Mastana
6. Yeh Raat Yeh Chand -
S.D. Burman, Hemant Kumar & Lata Mangeshkar
7. Das Main Ki Piyar Winchon - Lal Chand Yamla Jatt
8. Aa Giya Vanjara Chadha Lai - Harcharan Grewal & Surinder Kaur
9. Dheere Dheere Chal Chand -
Mohammed Rafi, Lata Mangeshkar & Shankar - Jaikishan
10. Bade Armanon Se - Mukesh, Roshan & Lata Mangeshkar
11. Na Na Karte Pyar - Suman Kalyanpur & Mohammed Rafi
12. Chaman Ke Rah Veerana - Shamshad Begum
13. Masti Bhara Hai Saman - Dattaram, Lata Mangeshkar & Manna Dey
14. Lak Hile Majajan Jandi Da - Durinder Kaur & Harcharan Grewal
15. Ni Main Kittan - Lok Geet
16. Yaad Kiya Dil Ne - Hemant Kumar, Lata Mangeshkar & Shankar - Jaikishan
17. Majhdar Mein Kashti - Surinder Kaur
18. Ek Do Teen - Shamshad Begum
19. Je Mundiya Tu Mainu Nachdi Dekhna - Narnder Biba & K.L.Agnihotri
20. Fire Night - Ravi Shankar
Popis
Indian classical music, with its complexity and rigid discipline, went largely ignored by the Western world until the mid Sixties when American group the Byrds discovered a sitar player by the name of Ravi Shankar recording in their studio. The Byrds introduced him to their Beatle friend George Harrison and the rest is, as they say, history. Following the Beatles’ lead, other rock bands such as the Rolling Stones and the Hollies began incorporating traditional Indian instruments into their music; this in turn led to Western audiences becoming aware of a vast and bewildering body of music from the Indian sub-continent. By this time, Indian classical music had been evolving for several centuries and its complex rhythms and intricate melodic structure had developed to a fine degree. Although this complexity may seem a little daunting at first, it is possible to appreciate the beauty of the kaleidoscopic melodies and hypnotic rhythms of Indian music without any training – although, as with most things, a little knowledge does help one appreciate the music even more. Indian music is based on a raga, which is a group of notes not unlike the Western concept of the scale. The ragas of Northern India are associated with a particular time of day or season of the year, unlike the ragas of Southern India which are more flexible in their associations. Improvisation is a key feature of the raga, which is probably why the music appealed to many rock musicians in the West. Very often the percussion instrument known as the tabla sets a repeating rhythm over which the melodic instruments use the notes of the raga to weave improvised melodies. Often the repeating rhythm has an unusual number of beats in the bar (to Western ears, at least); five or seven beats are often used. George Harrison copied this tradition on the ‘Sgt Pepper’ track ‘Within You, Without You’ by having a five-in-the-bar middle section over which he improvised on the sitar using the notes of the vocal melody. Ravi Shankar went on to build many bridges across different musical cultures, being involved in collaborations with classical violinist Yehudi Menuhin and in writing several concertos for sitar and orchestra (the first for the London Symphony Orchestra in 1970). Two of Shankar’s compositions are included on this compilation. ‘Karnataki’ features an improvised dialogue between Shankar’s sitar and Kanai Dutta’s tabla. It takes its name from the Carnatic, or Southern Indian, music genre. ‘Fire Night’ was composed by Shankar in 1962 but he does not play sitar on it. The track was inspired by the devastating fire in the Bel Air district of Los Angeles in 1961 and features jazz musicians, including bassist Gary Peacock and the flute of Bud Shank, improvising over a table rhythm played by Dutta. In complete contrast to the ancient and rigid disciplines of Indian classical music, the Bollywood style of Indian music is much more influenced by recent Western traditions including the Hollywood musical. The musicians who contribute their talents to the Bollywood movie are rarely, if ever, seen in the film. The vocalists are known as playback singers and the actors in the film lip-synch to the recordings of these singers. Many have become big stars in their own right – often more so than the actors themselves. The most famous of all playback singers is Lata Mangeshkar who was born in 1929 in the central Indian province of Madhya Pradesh. Her earliest roles in Hindi films were in the early Forties when she was just thirteen. Following the partition of India in 1947,she moved with her family to the newly formed state of Pakistan where she received a formal Indian classical music education. Lata developed her own individual style of singing. Although many Bollywood films are in Urdu, she was not a native Urdu speaker and needed to receive tuition in the language. Many believe that this contributed to her characteristic singing style. Her career has spanned more than seven decades and she has recorded songs for more than a thousand Hindi movies in over thirty-six Indian dialects. At one time, she featured in the Guinness Book Of Records as having made the greatest number of recordings by anyone in music history. She claimed she had made over twenty five thousand although this claim was later disputed. In 2011 Lata’s record was officially passed by her younger sister Asha Bhosle. Lata features on several of the tracks on our compilation. We have also included a third category of music on this compilation in addition to classical music and Bollywood songs. This is Indian folk music from the Punjab area of India, as performed by Tappe – ‘Bajre Da Sitta’ and ‘Hae O Mere Dadhea’ – and by the Fok Duet – ‘Boohe Te Maran’. Whether your musical interests lie with classical, popular or folk music, there is something for everyone on the menu of the Café Mumbai. Sleeve notes by Brian Parks
Prihlásenie
NOVÝ ZÁKAZNÍK
Newsletter