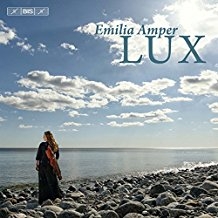 Ljus i mörkrets tid (Light in Times of Darkness)

Butterfly bazaar
Popis
In 2012, Emilia Amper’s solo début disc Trollfågeln (‘The Magic Bird’, BIS-2013) was a revelation. Not only to those who had never before heard the silvery sound of the nyckelharpa (‘keyed fiddle’), but also for the way Emilia on it combined her roots in Scandinavian folk music with her very own and individual voice. Lux, her new album, confirms the promise of the earlier disc – a selection of her own compositions and traditional Swedish and Norwegian tunes which she performs solo and with a group of musician friends in various constellations. With its roots stretching back to medieval Europe, the nyckelharpa (‘keyed fiddle’) almost died out in the middle of the twentieth century, but has made a remarkable comeback and is attracting an increasing number of performers in Sweden and around the world. Firmly grounded in Swedish traditional music, Emilia Amper has also worked with musicians from many other backgrounds, and can be regarded as an important ambassador for her instrument, but also for the inquisitive and open spirit which characterizes modern folk music.
Prihlásenie
NOVÝ ZÁKAZNÍK
Newsletter