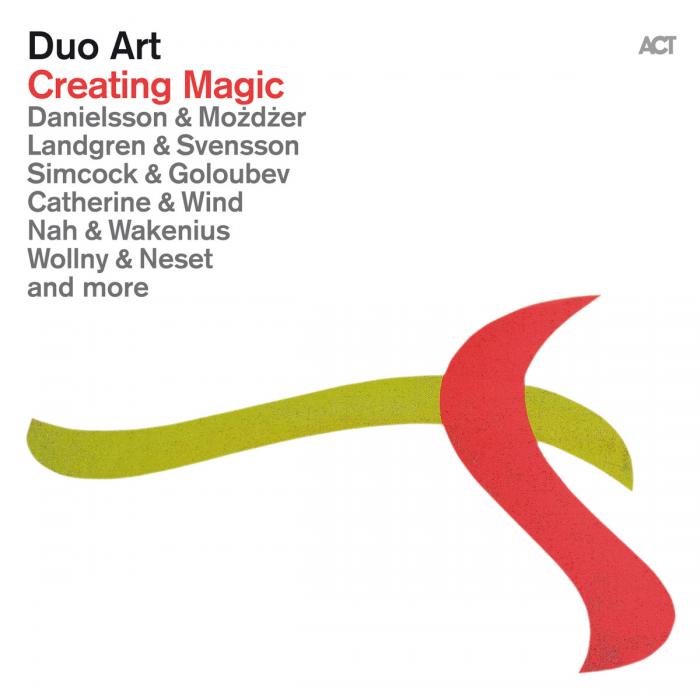 01 Sidsel Endresen & Bugge Wesseltoft Nightsong
02 Christof Lauer & Jens Thomas Green Dance
03 Nguyên Lê & Paolo Fresu Lacrima Christi
04 Lars Danielsson & Leszek Możdżer Pasodoble
05 George Mraz & Emil Viklický Up On A Fir Tree
06 Klaus Paier & Asja Valcic Tango Loco
07 Heinz Sauer & Joachim Kühn Lover Man
08 Jens Thomas & Verneri Pohjola T.N.T.
09 Wayne Krantz & Bob Malach Fate
10 Jonas Knutsson & Johan Norberg Jämtpelle
11 Danilo Rea & Flavio Boltro O mio babbino caro
12 Eddie Harris & Gil Goldstein You Stole My Heart
Popis
Duo Art – it is the most reduced form of making music together, while no less rewarding. When it succeeds it is the smallest big-band in the world. Two people all alone, in harmony and competition. Complementing each other, scrutinising, and telling each other their opinion – a fascinating ear-to-ear dialogue. Spontaneous and intense, call and response – jazz in its purest form. A musical tight-rope act without a safety net. Ideally, wonderful art results. The duet can be found all through the history of jazz. The oeuvre of every great jazz musician simply cannot be without its duet recording. The duet has also always been a source of fascination for ACT: "How will two musicians react to one another? Will they find a common ground and will it lead them to new heights?" To this day, ACT continues to seek new answers to these questions, and it dares to experiment with the most diverse of musician constellations. "Creating Magic" is a presentation of more than 20 years of ACT Duo Art and the musical trailer for the new ACT Duo Art series that documents magical dialogues. As early as in the initial ACT program in 1992, Jasper van‘t Hof, Bob Malach and Wayne Krantz joined forces in various duos. The Swedish pianist Jan Johansson is considered a pioneer of Scandinavian jazz. With "Jazz på svenska" (Jazz in Swedish) he paved jazz a road into folk music, significantly in a duet with Georg Riedel on the bass. Siggi Loch experienced the two musicians in 1964 in Hamburg at the NDR Jazzworkshop, and 30 years later he wrote further pages in the story of "Swedish Folk - Modern" together with Nils Landgren and Esbjörn Svensson. Together with the Polish piano high-flyer Leszek Możdżer, Swedish master bassist Lars Danielsson also achieves a harmonious symbiosis on "Pasodoble" that is rare to behold. Together they attain an unheard-of level of interaction and esprit. Iiro Rantala and Michael Wollny created an ethereal musical moment in their dialogue on two grand pianos on "Jazz at the Berlin Philharmonic" in December 2012: "Tears For Esbjörn" is a poignant homage to the piano visionary Esbjörn Svensson, who died in 2008. Wollny can also be heard in duet on "Creating Magic": the unreleased "Polygon", recorded at Schloss Elmau, with the Norwegian saxophone shooting star Marius Neset, is the first ever meeting of these two, perhaps most important young European jazz musicians of our time, and it shows in no uncertain terms that the future is bright. The sampler ends with a track that has, in its own tragic way, gained a place in jazz history: "You Stole My Heart" is the last recording that Eddie Harris made, briefly before his passing. After the concert recordings with the WDR Big Band, which can also be heard on "The Last Concert", he asked pianist Gil Goldstein to stay for an extra night session. One last time he exposed his soul in the song he dedicated to his wife. Back in Los Angeles he was hospitalised and died on 5 November 1996. "To make a dream come true, just take two" is how Marvin Gaye put it in his hit "It Takes Two". Sometimes less is more when it comes to creating magical moments – as "Duo Art Creating Magic" proves.
Prihlásenie
NOVÝ ZÁKAZNÍK
Newsletter