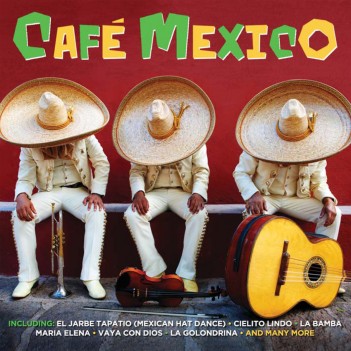 1. Mexico - Los Panchos
2. Munequita Linda (Te Quiero) - Luis Alberto De Parana
3. La Golondrina - Trio Majoco
4. Adios Mariquita Linda - Hemanas Hernandez
5. La Cubamba - Andres Huesca
6. Lagrima Quieta (A Quiet Tear) - Herb Alpert
7. Adios Muchachos - Los Tres Reyes
8. Quitame De Padecer - Jorge Fernandez
9. La Rosa Bianca - Tito Guizar
10. Sombras, Pasillo - Gilberto, Hernando Aviles, Los Tres Reyes And Raul Puente
11. Maldito, Abismo - Maria Dolores Pradera
12. El Chivo - Antonio Aguilar With El Mariachi De Pepe Villa
13. Cachito - Marimba Chiapas
14. Viegos Amigos - Magdalena Castro
15. Embrujo - Enrique Quezada, Gustavo Prado, Los Tres Diamantes And Saulo Sedano
16. En Memoria De Tu Amor - Trio Siboney
17. No Puedo Negar - Irma Vila And La Prieta Linda
18. Gema - Los Tres Reyes
19. Camino Del Mar - Hermanas Mendoza With Rafael Canchol
20. Rio Rebelde - Los Cuatro Hermanos Silva
21. Acapulco 1922 - Herb Alpert
22. La Tertulia - Los Caballeros
23. Mi Beso - Pedro Vargas With Noro Morales
24. Los Coronelas - Mariachi Pulido
25. Adelita - Los Tenientes
Popis
Mexico is the world’s largest Spanish-speaking country, so it is no surprise that its music is strongly influenced by Spanish culture. Pre-Colombian native music and black slave influences are less strong than in other parts of Central America; stringed instruments and European church and classical singing have had the greatest impact on the development of Mexican music. Three main strands predominate. Most famous is Mariachi music, seen played by groups of wandering minstrels in major towns and tourist resorts all over Mexico. Wearing embroidered clothes and characteristic sombreros, they have become a cliché – but the quality of the playing should not be underestimated. In the complete Mariachi group today there are as many as six to eight violins, two trumpets, and a guitar – all standard European instruments. Then there is a round-backed guitar called the vihuela which, when strummed in the traditional manner, gives the Mariachi its typical rhythmic vitality; a deep-voiced guitar called the guitarrón, which serves as the bass of the ensemble; and a Mexican folk harp, which usually doubles the bass line but also ornaments the melody. While these three instruments have European origins, in their present form they are strictly Mexican. The sound these instruments combine to make is unique – the heart and soul of Mexico. So it is only fitting that we should start our compilation by imagining we are sitting in a café on the edge of Mexico City’s Garibaldi Plaza, drinking a beer and being serenaded by a Mariachi band with ‘The Mexican Hat Dance’ ‘. The group Mariachi Mexico de Pepe Villa perform this traditional song here. Villa took over the group in 1953 and introduced the two-trumpet Mariachi sound which became all the rage. Mariachi Mexico enjoyed a string of hits between the Fifties and Seventies, and you can hear them again on CD 2 with Jorge Fernandez singing Villa’s own ‘Quitame De Padecer’ where the classical/operatic influence is very obvious. Secondly, from the Veracruz region, comes Jarocho music. ‘La Bamba’, our second track here is representative of this tradition. With a very complex rhythm and played on several small guitars, It was recorded in 1958 by Trio Guadalajara. This Trio, who also appeared as the Guadalajara Boys, were three guitarist-singers who appeared in several movies in the Forties and also performed with various orchestras. Generally decked out in stereotypical Mexican outfits, the group specialised in the popular Latino rhythm songs of the Forties and Fifties. The third tradition is the Huapango, a living musical tradition played by small groups at bars and parties all over the Mexican region of Huasteca. The bolero is very characteristic of Huapango music. The tradition is well illustrated here through the music of Los Panchos, a trio who played three small guitars and sang melodic songs in operatic harmony. They start CD 2 with the aptly-named ‘Mexico’ and also give us Velasquez’ famous ‘Besame Mucho’ (Kiss Me a Lot) and a further bolero, ‘Vaya Con Dios’ (Go With God). Much of Mexican music stays within national borders, but sometimes it escapes: here we feature Herb Alpert and the Tijuana Brass who became household names in the Sixties across the world. Not Mexican at all, but a trumpeter born in Los Angeles, Alpert not only outsold the Beatles in the mid Sixties record-wise, he also founded A&M Records which went on to record some of the biggest pop-music acts of the Seventies. His fascination with mariachi music started when he visited Tijuana in Mexico. He returned home and wrote ‘The Lonely Bull’ for trumpet; this track, complete with crowd noise effects, took him to Number 10 in the charts and effectively launched his career, although none of his band was Hispanic. Mexican and Latino rhythms also made a reverse conquest of Spain itself in the early twentieth century: listen to Maria Dolores Pradera, a Spanish singer who specialised in Latin-American music in the Fifties, as she sings the dramatic ‘Maldito, Abismo’ (The Doomed Chasm). Female singers such as Pradera would team up with Mexican musicians for their Fifties and Sixties recordings but rarely fronted them on a permanent basis. However, Trio Majoco, who we feature with Spanish composer Lacalle’s 1924 ‘Amapola’ (Pretty Little Poppy) and ‘La Golondrina’ (The Swallow), unusually included a female vocalist. Both songs have also been recorded by many non-Mexican artists. Trio Los Tenientes, another exponent of the bolero, are three men with guitars and tenor voices, singing in harmony and usually pictured wearing large sombreros so we will know they are playing Mexican music. They feature four times on this collection and play our closing track, the lively ‘Adelita’, complete with shouts of joy. It is important to remember this music is not just music to be played and sung. From the very start it was music to be danced to. So share it with your neighbours and get your feet tapping now!
Prihlásenie
NOVÝ ZÁKAZNÍK
Newsletter