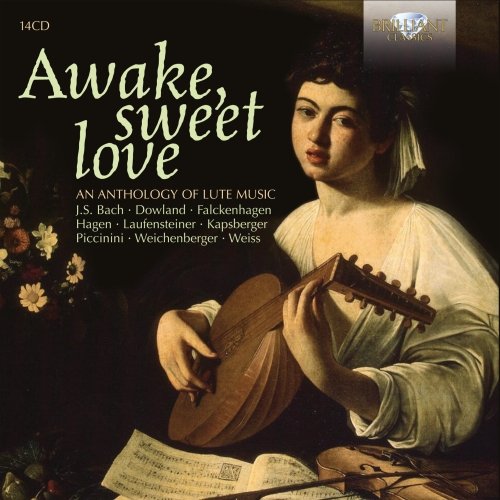 Dowland: The First Book of Songs


Jakob Lindberg, Mario D’Agosta, Luciano Contini, Yavor Genov, Miguel Yisrael, Nigel North, Christopher Wilson (lutes)
Popis
Drawing together various previous releases from the Brilliant Classics collection, this compendium pays tribute to an instrument that was once at the forefront of everyday music making, tracing its extensive and highly fruitful career. The lute counts among its writers some of the greatest names in music history, and indeed the anthology contains a large corpus of music by John Dowland – one of Britain’s most prolific Renaissance composers. His extraordinary varied music is accompanied by the likes of Henry Purcell, who rounds of the compilation, and by Johann Sebastian Bach, whose lute offerings represent the florid repertoire of the courtly salon music then in vogue. Interspersed between these big names, however, is a rich catalogue of works that are the missing links to understanding the development of lute music and of music in general; while Miguel Yisrael’s Les Baricades Mistérieuses programme recalls the dominance of the French school during the 17th century, Germany appears to have taken over as the new centre of European lute music by the mid‐18th century, as evidenced by the rich culture of music making at the court of Bayreuth (CD12). Here a more galant, or cantabile expression of music was developing, and in Austria, too, lute music – particularly the lute trio – was seen as a precursor to the emergence of Viennese Classicism and the establishment of the new Empfindsamer style.The collection contains a wealth of lutenists, all of whom are at the top of their profession and enjoy international careers. Guaranteed to provide hours of engaging listening, this release records an essential but often‐overlooked facet of music history and is a must‐buy for anyone with an interest in string repertoire.
Prihlásenie
NOVÝ ZÁKAZNÍK