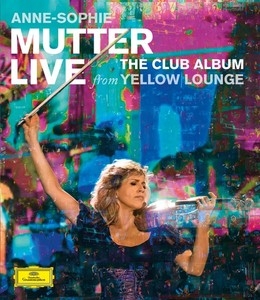 
Hungarian Dance No. 1 in G minor

Lambert Orkis (piano)
Popis
Virtuoso violinist Anne-Sophie Mutter created a sensation at Berlin’s Neue Heimat venue, recreating the impact of her legendary 2013 Yellow Lounge appearance, when she attracted one of the biggest crowds in the history of Deutsche Grammophon’s ground-breaking “classical-goes-clubbing” series. Now she’s pushing the electric atmosphere to the limit by making the first-ever live Yellow Lounge recording. The ‎ground-breaking project, co-produced by Deutsche Grammophon and ZDF, is set for global release in August, with German TV broadcasts in the summer and autumn, and a special documentary to follow in 2016. Deutsche Grammophon President Mark Wilkinson welcomed Mutter’s return to the Yellow Lounge: “Last night, in Berlin, a part of classical music changed for ever. Anne-Sophie Mutter is breaking down boundaries, and taking risks without compromising her art – ultimately pushing on a door through which we hope others will follow.” On stage with Mutter were her longtime accompanist Lambert Orkis, the Mutter Virtuosi – a hand-picked ensemble of young alumni of the Anne-Sophie Mutter Foundation – and star harpsichordist Mahan Esfahani, whose solo debut with Deutsche Grammophon is released this month. The programme spanned three centuries of classical music – from Bach and Vivaldi to Gershwin and John Williams – and was conceived by the violinist exclusively for this Yellow Lounge event and the accompanying album. Yellow Lounge fuses the classical world and club culture, combining performances from stars of the former with cutting-edge DJ and VJ sets in urban spaces. On turntables this time were DJs Clé and Canisius, who’ve worked numerous Yellow Lounges, as has world-renowned VJ Philipp Geist, who was responsible for the stunning visuals.
Prihlásenie
NOVÝ ZÁKAZNÍK