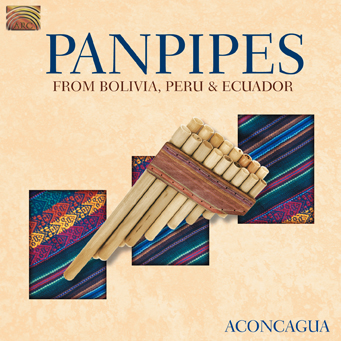 15. Canela en flor (Oscar Castro C.) - 3:23
Popis
Aconcagua presents song and melodies from Bolovia, Peru and Ecuador, featuring the whole variety of panpipes (siku, zampoña, rondador), flutes (kena, kentia, kenacho, pinkillo), moceño (ceremonial flute), penny whistles, recorder, as well as stringed instruments, e.g. cuatro (Venezuelan 4-stringed guitar), charango (small lute made of the carapace of an armadillo), mandolin, tiple (South American lute), vihuela, guitarron, requinto… ACONCAGUA is the name of a project, that the multi-talented and very versatile musician Pablo Cárcamo has wanted to do for some years. For more than 20 years he has been conversant with the music of the Andes and he plays all the instruments from the kena to the pan flute, from the charango to the bombo and many more. His mastery of the instruments grew to higher and higher levels over the years and he can be called one of the really great masters of the music of the Indians of South America. His knowledge of the Aymara and Quechua dialects, his experience as a producer of many South American groups (amongst others Alpamayo, Ukamau, Joël Francisco Perri) and his skill in writing clear arrangements that do not alter or taint but rather bring to the fore the character of the original pieces, have made Aconcagua a work of extraordinary quality and fascination. Aconcagua brings to you songs and melodies from Bolivia, Peru and Ecuador and contains the whole wide variety of Andean flutes. Through the variety of the presented cultures and their varying use of instruments this recording is very versatile and enjoyable. PABLO CÁRCAMO Pablo was born 1951 in Santiago, Chile. In his earliest childhood his natural talent for music could already be seen: at the age of 5 he played accordion in public; later he performed on guitar, pan flute and double bass. Today he is a master of all typical South American instruments like charango, cuatro, indian flutes, panpipes and others. Pablo has done concert tours in South America, Europe and China. He has performed with famous international artists. In 1991 Pablo played in Kuala Lumpur at the invitation of the King of Malaysia. He received many honours there during the Malaysian-Chilean friendship weeks. Pablo is the expert in South American music. His many recordings show his unbelievable versatility: Folklore, samba, salsa, cumbia, merengue… Pablo is familiar with all these styles.
Prihlásenie
NOVÝ ZÁKAZNÍK