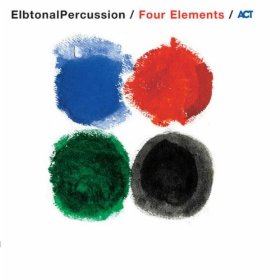 12 Elements Part 1 ‘Earth’ (Bonus Track) ( Bantzer, Claus / Behrend, Jan-Frederick / Krause, Stephan)
Popis
Earth, Air, Fire and Water: the four elements of our planet. That is also the theme of the second ACT album by ElbtonalPercussion. On the previous album Drumtronic (ACT 9601-2) they were able to show their skills as classically-trained percussionists capable of using loops and other electronic effects treading a fine path between acoustic and electronic and between rhythmic parts and melodies. TAZ found ElbtonalPercussion to be "somewhere which you would not usually expect a classically trained ensemble to be - in urban spaces, in clubs and in the neon-lit night". Jazz Podium thought it to be "an exciting journey through time and space". On "Four Elements" they go back to basics, in that electronics are not as dominant as on their ACT debut. The number 4 has a special meaning to ElbtonalPercussion: There are four percussionists. They come from Hamburg (phone code 040). Astrologically, the four elements are well balanced among the band members. They create music in four styles: classical, new music, jazz rock and drum & bass. This then forms the basis for their stylistic foray through four continents: Africa, Asia, America and Europe. No mere taking of stock, no copying and no reversion into repetitive trance percussion. By extending the twelve tone world to include quarter tones, they create unique structures and open soundscapes. Just like ingenious sound theraptists they use their accomplished techniques to generate far-reaching stimulants. They extend the sound horizon through the use of their own sound engineering and production with hall and delay effects and filters. The result is wide-ranging but original without being eclectic. And it is all aesthetically perfect. Africa shines through the opening track "Bamboole", with many wooden percussion instruments such as marimba and bamboo xylophone. "African Blues" is introduced by an African talking drum. "Veddle" uses an original African hand xylophone. The title itself is inspired by the location of the rehearsal room, on the Veddel in the Hamburg Freeport. The quartet has many connections to Asia, and particularly Japan. They played at the Iwamizawa Art Festival in Sapporo in 2002 with the Hamburg Ballet of John Neumeier. ElbtonalPercussion also performed together with the string quintet G-Strings at the Schleswig Holstein Music Festival 2005, where the main theme was Japan. "Squabble", a composition by Stefan Pintev and Jan-Frederick Behrend, is a lasting document of the project with G-Strings. Additionally the instrumentation is very much influenced by Japan. Particularly the bass barrel drum O-Daiko, played by Wolfgang Rummel with large wooden truncheons and which the Kieler Nachrichten described as a drum of "epic proportions". It’s made from a specially-selected tree trunk and covered with cow or goat skin. For the lighter sound colours Elbtonal uses the smaller Shimi-Daiko. America and Elbtonal: the blues is the most important element of Afro-American culture and it is the heart of jazz. That’s the case in "Blues for Gilbert". America also gave the world minimalism. Composers such as Steve Reich, John Cage and Philip Glass are role models for the four percussionists, such that small repeated ethnic elements can develop a most meditative momentum. In "Minimalectric" (by Stephan Krause and Jan-Frederick Behrend), short phrases on mallet-based instruments are played and looped. The dense trance is ended by the horn used as a classic orchestral instrument and with the organ of Claus Bantzer in the background. And last but not least Europe is noticeable through elements of British Drum & Bass and TripHop as well as from Andrej Kauffmann’s arrangements of Sting’s "St. Agnes & The Burning Train" and Wolfgang Dauner’s "Drachenburg". And of course through all the variety of Hamburg influences. ElbtonalPercussion are proud to be residents of the liberal-minded city on the Elbe. They are also proud of one of their role models: Claus Bantzer. The organist, pianist and composer hasn’t just provided two compositions of his own - the theme music from the Doris Dörrie film "Paradies" und "Elements Part 1‚ Earth" - but also plays on the album as a special guest.
Prihlásenie
NOVÝ ZÁKAZNÍK