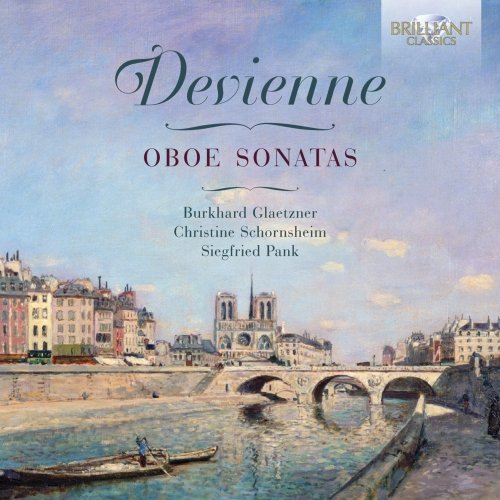 Burkhard Glaetzner (oboe), Siegfried Pank (cello) & Christine Schornsheim (pianoforte)
Popis
Born in 1759 in Joinville, France, Francois Devienne was a virtuoso bassoonist and flautist who also enjoyed a European reputation as a brilliant composer. A member of the French Guard whose ‘opéras comiques’ were in high demand during the revolutionary years, the Frenchman was later appointed first flute professor of the newly established Paris Conservatoire, where he became a much sought‐after teacher. Today he is best remembered for his prodigious output of wind chamber music. Grace, formal elegance, melodic originality and harmonic boldness are just some of the hallmarks of Devienne’s style, all of which are to be found in the four oboe sonatas that make up this charming release. Drawn from three collections that were probably published around the turn of the 18th century, the works reflect both the musical taste of the composer and the expectations of the audiences that would have frequented 18th‐century salons – the settings for chamber music works of this kind. From fecund imagination and lightness of touch to vivacity and virtuosic exploration, Devienne’s pieces reveal his innate understanding of the inherent possibilities of the oboe, which dominates the musical proceedings with bravura and emotional intensity. Performing these works are three of the leading German instrumentalists of their day: oboist and former member of the Neues Bachisches Collegium Musicum, Burkhard Glaetzner; harpsichordist Christine Schornsheim, whose accolades include the Diapason d’Or and Preis der Deutschen Schallplattenkritik; and cellist Siegfried Pank, soloist and former principal cellist of the Leipzig Gewandhaus Orchestra. Contains notes on the composer and the music. Recorded November 1990, Paul‐ Gerhardt‐Kirche, Leipzig.
Prihlásenie
NOVÝ ZÁKAZNÍK
Newsletter