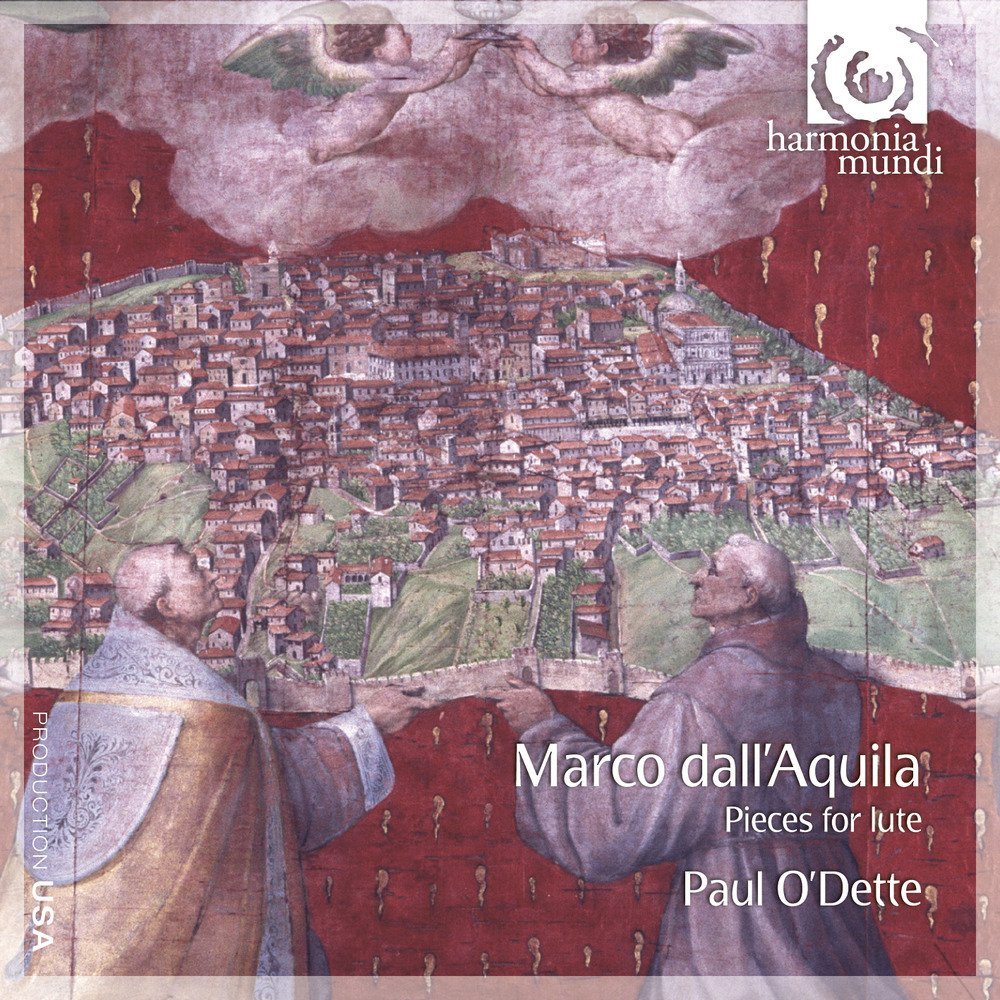 
Paul O’Dette (lute: 6-course lute by Paul Thomson, London, 1984, after Magno Tieffenbrucker, c. 1550; 6-course alto lute by Grant Tomlinson, Vancouver, 1997, after Italian models)
Popis
Star lutenist Paul O’Dette turns his focus on Marco dall’Aquila, a composer of remarkable individuality and creativity. In the lute’s transition from late-medieval style into fully formed Renaissance idiom, Marco was a pivotal figure and his trademark style brisé influenced the development of instrumental music for the next 200 years. “If the lute could be said to have a star performer, then Paul O'Dette must surely be it. He's the most sought-after lute performer at music festivals round the world, his recordings are always showered with awards, and he has a virtuoso touch and musical intelligence that I've rarely seen matched.” The Daily Telegraph "Nestled at the foot of the Gran Sasso, in the rugged Apennines northeast of Rome, lies the picturesque medieval city of L’Aquila. In 1569, the city commissioned a series of triumphal arches decorated with portraits of the most important citizens of L’Aquila in honor of the arrival of Margaret of Austria, who claimed governorship over the region. Two musicians were included among the most celebrated natives, Serafino Aquilano, the famous song stylist and lutenist of the late 15th-century, and the lute virtuoso Marco dall’Aquila (c.1480-1544). Marco appears to have spent most of his professional career in Venice. In 1505, he obtained a privilege from the Venetian Signoria to publish lute music, but Ottaviano Petrucci seems to have objected and Marco’s publication apparently never appeared but is now housed in the Bavarian State Library, Munich Mus Ms. 266. The pieces included here represent a selection from Munich 266, as well as the three works included in Casteliono’s print, arranged into sets alternating Ricercars or Fantasias with intabulations and dances as suggested by various 16th-century sources. The dances have also been arranged into suites, either involving variations of the same dance, or groups of dances of different meters and characters. Although not all of these works are attributed to Marco in the manuscript, they are all contained in a single fascicle in which the anonymous works are wedged in between works bearing Marco’s name. At 3:32 am on April 6, 2009, a powerful earthquake struck L’Aquila, destroying much of the historic town center and many of the beautiful medieval villages that surround the city. The producers and I originally planned to make this recording in L’Aquila, but when this proved impossible, we chose a medieval church near Capestrano, 45 kilometers south of L’Aquila. Shortly before our arrival it was discovered the church had also sustained structural damage and required immediate repairs. At the last minute, the Castello Piccolomini in Capestrano was kindly made available to us by the mayor, Antonio D’Alfonso. While the acoustics of the Castello are perhaps more reverberant than one is accustomed to hearing on lute recordings it is nevertheless a venerable edifice that Marco may well have known, and it lends a special air of historical presence to the sound. This recording is dedicated to the victims of the earthquake, those kind and brave Aquilani whose richly distinctive culture has nourished my exploration of Marco’s music for the past decade." Paul O’Dette, Capestrano, (AQ), 3 August 2009
Prihlásenie
NOVÝ ZÁKAZNÍK