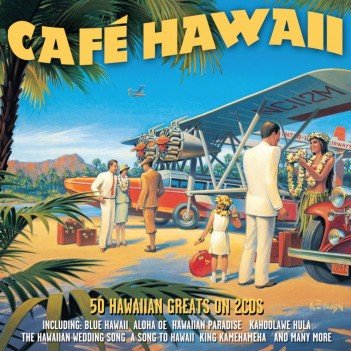 1. King Kamehameha - Sol Hoopii
2. Isn't It A Lovely Day - Roy Smeck
3. Hawaiian Paradise - Alfred Aholo Apaka
4. Kahoolawe Hula - The Kamaha'os Trio, Leonard Kwan
5. Manini Chimes - Leonard Kwan
6. Ti-pi-tin - Roy Smeck
7. Akaka Falls - Sol Hoopii & His Novelty Quartette
8. A Song To Hawaii - Bob Pauhale Davis, Leonard Kwan
9. Aloha Oe - Alfred Aholo Apaka
10. Hula Blues - Sol Hoopii & His Novelty Quartette
11. Take Me Back To My Boots And saddles - Roy Smeck
12. Kaneohe-Mama E - Leonard Kwan
13. Don't Stop Loving Me - Sol Hoopii
14. Moonlight And Shadows - Alfred Aholo Apaka
15. Manini - Leonard Kwan
16. There's Nothing Else To Do - Sol Hoopii
17. You Took The Words Right Out Of My Heart - Roy Smeck
18. Silver Threads Among The Gold - Leonard Kwan
19. Moon Of Manakoora - Alfred Aholo Apaka
20. Aloha Beloved - Sol Hoopii & His Novelty Quartette
21. Yellow Ginger Lei - Leonard Kwan
22. Nono Paipai - The Kamaha'os Trio, Leonard Kwan
23. Remember Me - Roy Smeck
24. I Want Someone To Love Me - Sol Hoopii
25. Now Is The Hour - Alfred Aholo Apaka
Popis
The music of Hawaii is unlike any other in the world. There are variations of Hawaiian music as rich and diverse as the islands’ cultural mix – everything from rock‘n’roll and rap to jazz and the Hawaiian form of reggae known as Jawaiian, using the distinctive sounds of the ukulele and steel guitar. The ukulele is mistakenly believed to be an ancient Hawaiian instrument, but it was in fact imported by Portuguese immigrants at the end of the 19th century. It’s still a fundamental part of Hawaiian musical landscape. Hawaii also lays claim to a unique local way of playing the guitar – slack key, which uses a ‘slacked’ or loosened string tuning. When Mexican cowboys showed locals how to play, many Hawaiians adapted the style to better suit island lyrics. Playing techniques including hammering-on, pulling-off, harmonics and slides mimick the falsettos and vocal breaks common in Hawaiian singing. Steel guitar is another musical style developed in the islands. A unique sound is created with the help of a steel bar that slides along the strings. Featured in many Hawaiian bands since the early 1900s, steel guitar remains a popular element in modern Hawaiian music. We showcase four of the most influential 20th-century exponents of Hawaiian music, rich in influences and never less than entertaining. Sol Hoopii took traditional Hawaiian music to meet American jazz. Born in 1902 in Honolulu, the youngest of 21 children, he began playing ukulele at age three and soon learned guitar. He stowed away on an ocean liner in 1919 and ended up in Los Angeles, where he formed a trio with Glenwood Leslie and Lani McIntire. He took up electric lap steel guitar around 1935 and developed a sophisticated C# minor tuning. He was expert at applying blues-influenced treatments to standards of the day, as well as Hawaiian favourites such as ‘Hula Girl’ and ‘My Hawaiian Queen’. He recorded his best-known material for Decca and Brunswick between 1933 and 1938, playing variously as Sol Hoopii's Novelty Trio, the Novelty Quartette and the Novelty Five. ‘King Kamehameha’ and ‘Ten Tiny Toes, One Baby Nose’ come from this era. Alfred Aholo Apaka was born in Honolulu in 1919 and died suddenly in 1960. His stunning baritone and good looks earned him the title of ‘The Golden Voice of Hawaii’. Although he recorded for less than a decade, Apaka set the standards for modern Hawaiian song. During the Forties, Apaka performed with several orchestras including Don McDiamond’s Royal Hawaiian Hotel house band and Ray Kenney’s band in New York. Apaka also became a regular guest on Bob Hope’s radio and television shows after being overheard by the actor while singing in Honolulu. Rather than become a mainstream singer, Apaka took a different route and convinced multimillionaire Henry Kaiser to build a hotel, the Hawaiian Village, where he starred in his own extravagant revue. We feature him here on such well-known songs as ‘Blue Hawaii’, Rodgers and Hammerstein’s ‘Bali Ha’i’, ‘The Hawaiian Wedding Song’ and ‘Hawaiian Paradise’. ‘Aloha ‘Oe’ (Farewell To Thee), written around 1913 by his forebear Queen Lili’uokalani, is a particular favourite. Roy Smeck was not a Hawaiian but was born in Reading, Pennsylvania in 1900. A master musician nicknamed ‘The Wizard of the Strings’, Smeck is notable for his technical skill as well as his historical importance. Everything he did was innovative, for professional guitar-playing hardly existed when he started his career. His performances draw on ragtime, pop, blues, ethnic music and jazz. Smeck, who made over 500 recordings for Edison, Victor, Columbia, Decca, Crown, RCA and others, wrote instruction books for guitar, Hawaiian guitar, uke and banjo. He played at Roosevelt’s presidential inaugural ball in 1932, George VI’s coronation review in 1939 and toured worldwide, as well as appearing on TV and writing film soundtracks. Leonard Kwan was one of the most influential slack-key guitarists to emerge in the mid-20th Century. Born on Oahu in 1931, he studied string bass in high school and learned to play traditional slack-key guitar from his maternal grandfather. He recorded the first LP of slack-key instrumentals, co-wrote a slack-key instruction book and composed a number of pieces that have become part of the standard repertoire. Unlike the other musicians showcased here, who made their names with their renditions of others’ songs, he wrote much of his own material. Kwan’s original instrumental ‘Opihi Moemoe’ would become his signature piece. Recorded in 1958 as a single, it was followed in 1960 by ‘Slack Key’, the first album to consist entirely of slack-key instrumentals. We also include here his compositions ‘Manini Chimes’ and ‘Nahenahewiki’. Put your feet up, put on these CDs and let this music carry you back to softer times and warmer climes.
Prihlásenie
NOVÝ ZÁKAZNÍK
Newsletter