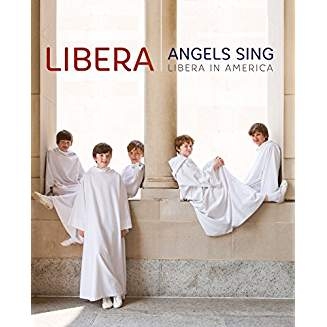 2. How can I keep from singing

3. How shall I sing that majesty

4. Libera in Washington – Behind the Scenes (Produced & directed by Steven Geraghty & Simon Lewis)
Popis
Libera, the celestial-sounding, chart-topping boy choir, recorded a live concert for CD and DVD in Washington, D.C. at the spectacular Basilica of the National Shrine of the Immaculate Conception. With Libera in America, the young Londoners pay tribute to their host country with a characteristic blend of sacred and secular music in both the classical and popular traditions, bringing together innovative textures, meditative solos and shimmering, ecstatic choral harmonies. The young, pure-voiced singers of Libera have come a long way from Norbury in South London, where many of the boys sing in their local church. Following the huge success of their 2013 album Christmas in Ireland, they have crossed the Atlantic for this new CD and DVD/Blu-Ray: Libera in America. The US capital of Washington, D.C. was the location for the live concert recording, made at the spectacular Basilica of the National Shrine of the Immaculate Conception, the largest Roman Catholic church in North America. Built in the grand Romanesque-Byzantine style, it is in fact one of the largest historic churches in the world, seating 3,500, and houses an unrivalled collection of contemporary ecclesiastical art, including splendid, gleaming mosaics in its domes. Guided by their music director Robert Prizeman, the 40 boys of Libera let their voices take flight in atmospheric arrangements of religious and secular music. The album opens with Joyful, Joyful, We Adore Thee, based on Beethoven’s 9th Symphony, and among the inspiring choral gems that follow are some of Libera’s greatest hits – including Sanctus (from Johann Pachelbel’s famous Canon) and Song of Life by the Japanese composer Takatsugu Muramatsu. The programme includes such universal sacred favourites as Amazing Grace and Schubert’s soaring Ave Maria. Wayfaring Stranger, the American folksong popularised around the world by the likes of Johnny Cash and Eva Cassidy, also features, as does the uplifting What A Wonderful World, a huge hit for the great Louis Armstrong in 1967. Libera also play tribute to their host country with the anthemic America the Beautiful. The group has quite a history performing in the USA. In 2008, when Pope Benedict XVI made his first visit, Libera performed to a congregation of 60,000 at New York’s Yankee Stadium, the only British artists to take part in that historical event. They have also appeared at Kennedy Center in Washington, D.C. and on CBS television to salute Kennedy Center honoree Brian Wilson of Beach Boys fame; they have performed at the Starkey Foundation Awards in the presence of President Bill Clinton, and took part in Sunday worship at the 2,700-seat Crystal Cathedral in Los Angeles, broadcast to millions on The Hour of Power. The DVD version of Libera in America will be showcased on PBS (Public Broadcasting Service) in Spring 2015 as part of its TV fundraising drive. A special feature of the DVD is a documentary, Libera in Washington – Behind the Scenes, showing highlights of the tour both on and off stage from the boys’ perspective.
Prihlásenie
NOVÝ ZÁKAZNÍK
Newsletter