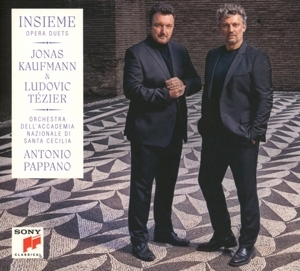 18,50 €
Formát:
CD
Dostupnosť:
na sklade / dostupné okamžite
Katalógové číslo:
1943998700
EAN kód:
194399870020
Autori:
Amilcare Ponchielli, Giacomo Puccini, Giuseppe Verdi
Interpreti:
Antonio Pappano, Jonas Kaufmann, Ludovic Tézier, Orchestra dell´Accademia Nazionale diSanta Cecilia
Vydavateľ:
SONY Classical
Zoznam skladieb
1
Giacomo Puccini: La Boheme, Act IV: 'In un Coupe?...O Mimi, tu piu non torni'
2
Amilcare Ponchielli: La Gioconda, Op. 9: 'Enzo Grimaldo, Principe di Santafior, che pensi?'
3
Giuseppe Verdi: Les Vepres Siciliennes, Act I: 'Quel est ton nom?'
4
Giuseppe Verdi: Les Vepres Siciliennes, Act Iii: 'je N'en Puis Revenir'
5
Giuseppe Verdi: Don Carlos, Act II: 'Le voila! C'est l'infant!'
6
Giuseppe Verdi: La Forza Del Destino, Act Iii: 'solenne In Quest'ora'
7
Giuseppe Verdi: La Forza Del Destino, Act Iii: 'ne Gustare M'e Dato Un'ora Di Quiete'
8
Giuseppe Verdi: La forza del destino, Act IV: 'Invano Alvaro'
9
Giuseppe Verdi: Otello, Act II: 'Tu?! Indietro! Fuggi!' - 'Era la notte' - 'Si, pel ciel marmoreo giuro'
Popis
"Insieme" ("Together") is the name of the first duet album by Jonas Kaufmann and his friend, the French star baritone Ludovic Tézier. The famous duets from operas by Verdi, Puccini and Ponchielli were recorded with the Orchestra dell'Accademia Nazionale di Santa Cecilia under the excellent direction of Antonio Pappano On stage they are often rivals, in real life Jonas Kaufmann and Ludovic Tézier share a close friendship. After numerous acclaimed live performances together, the first duet album of the two exceptional singers is released: "Insieme", Italian for "Together" is the title. With the outstanding Orchestra dell'Accademia Nazionale di Santa Cecilia under Antonio Pappano, they present duets they sang together on stage and pieces they rehearsed especially for this album Since their joint "Werther," in Paris in 2010, they have been recurring stage partners in various productions; and as in their duet album, Verdi's works play a central role When they embodied the rivals in "La forza del destino" for the first time in 2013 at the Bavarian State Opera, it was immediately noticeable: two have found each other who cheer each other on. in 2017 they were on stage in Paris in the French original version of Verdi's "Don Carlos"; so it is only logical that the famous duet of Carlos and Rodrigue is heard on their duet album in this version. Here, for once, they are not eternal adversaries, but true allies, in one of opera's most beautiful male friendships Moreover, this is the first time the two have been heard together in "Otello." For Kaufmann's debut as Otello, in 2017 at the Royal Opera House in London, Tézier was supposed to debut alongside him as Iago, but unfortunately he had to cancel. And so it came to pass that the recording sessions during the 2021 lockdown became the first joint "Otello" of the two, even before Tézier "caught up" with his first stage Iago at the Vienna State Opera. The fact that with Antonio Pappano on the podium of his Orchestra dell'Accademia Nazionale di Santa Cecilia one of the most distinguished opera conductors of our time is on board with his excellent orchestra is another stroke of luck for this recording Both singers are heard here for the first time in the great duets from Verdi's Les vêpres siciliennes, in the rarely performed French version. The duet from Ponchielli's verismo masterpiece "La Gioconda" is also a true double debut, soon to be followed by a joint performance of the complete opera. Puccini's "La bohème," on the other hand, has already been sung by both of them on stage, but not yet together; here they are heard together for the first time with the duet from the 4th picture.
Prihlásenie
NOVÝ ZÁKAZNÍK
Newsletter