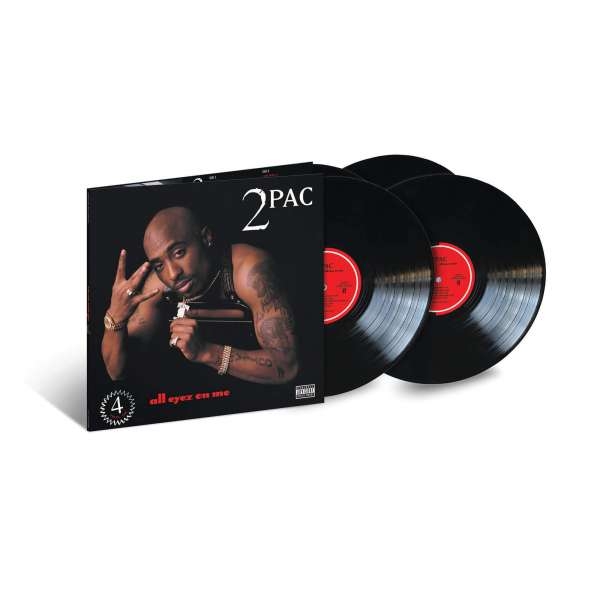 Side F:
5 When We Ride
6 Thug Passion
7 Picture Me Rollin’

Side H:
4 Run Tha Streetz
5 Ain’t Hard 2 Find
6 Heaven Ain’t Hard 2 Find
Popis
All Eyez on Me is 2Pac's fourth studio album and the last to be released during his lifetime. The album was released on February 13, 1996 by Death Row and Interscope Records and features guest appearances by Dr. Dre, Snoop Doggy Dogg, Redman, Method Man, Nate Dogg, Kurupt, Daz Dillinger, E-40, K-Ci & JoJo and the Outlawz, among others The album features production from Shakur and a variety of producers including DJ Quik, Johnny "J", Dr. Dre, DJ Bobcat, Dat Nigga Daz, DJ Pooh, DeVante Swing and others The album included the number one singles "How Do U Want It" (featuring K-Ci and JoJo) and "California Love" (with Dr. Dre, featuring Roger Troutman) and the hip-hop ballad "I Ain't Mad at Cha," as well as the Snoop Dogg collaboration "2 of Amerikaz Most Wanted" as a promotional single. It featured a total of four singles, most from Shakur's albums. In addition, All Eyez on Me made history as the first double-length hip-hop solo album released worldwide for mass consumption All Eyez on Me was 2Pac's second album to reach number one on both Top R&B/Hip-Hop Albums charts, selling 566,000 copies in its first week Upon its release, All Eyez on Me was immediately praised by critics and ranked as one of the best hip-hop albums as well as one of the best albums of all time. In 2020, the album was ranked #436 on Rolling Stone's updated list of the 500 Best Albums of All Time.
Prihlásenie
NOVÝ ZÁKAZNÍK
Newsletter